“From a child I’ve always wanted not only to climb but to be at high points, a slight addiction to altitude. Saying that, it’s the view you actually take in when you’ve accomplished this.

The Matterhorn its self is a climbers dream, one of the deadliest mountains in the world, more dangerous than Everest: fact.

When we all draw a mountain as kids we all draw the Matterhorn, it’s steep edges are sublime within itself. A magical mountain to look and gaze at.

I hadn’t climbed for at least 8 years from when I left The Parachute Regiment; I had climbed all over the world including the Himalayas in India.

I had been up in the Isle of Skye doing the Inn Pinn on Christmas day with a part Cuillin Ridge Traverse when I knew I had to get back into climbing. Using this and plenty of training in Glencoe, which I now call my back garden along with the Nevis range Ben Nevis North face routes, I had training in hand.

At the same time I knew I could do this with a combined charity awareness but a solo attempt was something else.

On arrival in Switzerland seeing the Matterhorn for the first time I knew I had a strong task ahead of me.

Starting the climb at 6:00am making my way up near vertical walls, along with rock fall and a climber, whose ice axe had fallen from him just missing my head. 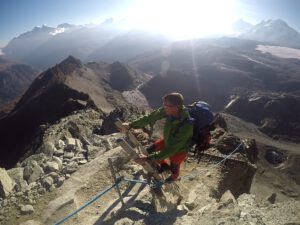 I made a traverse on to the North face, which seems like madness but is actually easier climbing with axes and crampons, making a summit at 11:30am. Spending far to much time at the top I realised I had to start making my way down the Hornli Ridge.

I had caught up with a French couple who were struggling to get down in time. Despite knowing helping them meant I would be delayed and would be coming down in darkness, I stopped to help them abseil to the solvey hut and a helicopter was called for their extraction.

I continued down the mountain and then darkness hit me at 7:30pm. Now exhausted and having to set up at least 20 belay pitches in darkness was a task within itself. I finally reached the bottom wall at 9pm.

With determination and a good mind set you can accomplish your dream and knowing at the same time you’re doing something not only for yourself but for lots of different people.”

Cliff took on the challenge of the Matterhorn solo in September. You can still donate towards his fundraising page by clicking here.