In December 2018, Neil Young and Peter Ketley will attempt to row 3,000 miles across the Atlantic as part of the Talisker Whisky Atlantic Challenge.

Neil and Peter, both ex-2 PARA, have chosen to take on the incredible challenge of rowing 3,000 miles across the Atlantic in the hopes of both raising thousands of pounds for their three chosen charities and attempting to set a world record as the oldest pair to row the Atlantic (their combined age will be 123 when they set off!)

‘The Grandads’ are doing this as part of the 2018 Talisker Whisky Atlantic Challenge, described as ‘the world’s toughest row’. 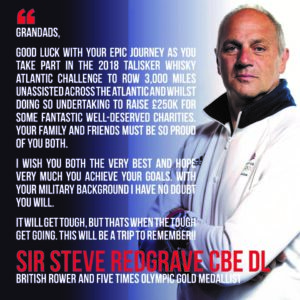 ​The 2018 event will see approximately 30 teams take on the colossal challenge of racing 3,000 miles across the Atlantic, using nothing but oars and sheer determination.​

The teams are unassisted. They will take enough food to survive at least 70 days at sea and will need to navigate the route and manage any repairs (including underwater) on their own.

Neil and Peter are raising money for Dreams Come True, Support Our Paras and RBLI.  You can donate to their charities here.

The Grandads don’t expect to win the race, but they’ll give it a damn good try! Follow their journey at www.grandadsoftheatlantic.com