On the 23rd May 2017 a Challenge Team embarked on a life defining journey. Their Goal was Simple, the Task, Monumental, the Reason, Inspirational.

Karl Rushen, long time supporter of SUPPORT OUR PARAS, founded The 100 Peaks Challenge a few years ago in memory of his brother Lloyd (Lloydy) who was KIA in Afghanistan 2011. 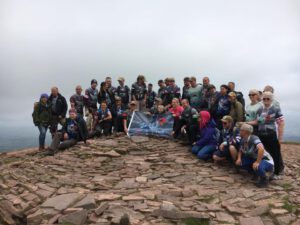 The Challenge was to run 100 Peaks in the UK, all above 610m (2000ft) – approx. 45 in Scotland, 25 in England (The Lake District), 1 on the Isle of Man and 29 in Wales (Snowdonia & The Brecon Beacons). The team began in Scotland, before heading across to the Isle of Man, crossing the Irish Sea in sea kayaks. They then crossed the Irish Sea for a second time back to the Isle of Whithorn to then cycle on to the Lakes. The final leg in Wales began in Snowdonia and culminated with cycling from Capel Curig to the Brecon Beacons finishing with the ‘Fan Dance’ at the Summit of Pen Y Fan.

The Challenge was a genuine attempt at something quite epic. It encompassed three disciplines that are demanding enough on their own, but are then thrown together in an extreme triathlon. This, with the logistics of attempting to summit 100 Peaks in 4 countries in 25 days, meant it was a first.

The 100 Peaks Challenge is raising money for SUPPORT OUR PARAS and ABF The Soldiers’ Charity.  You can still donate to Karl and his team, please visit their fundraising page.